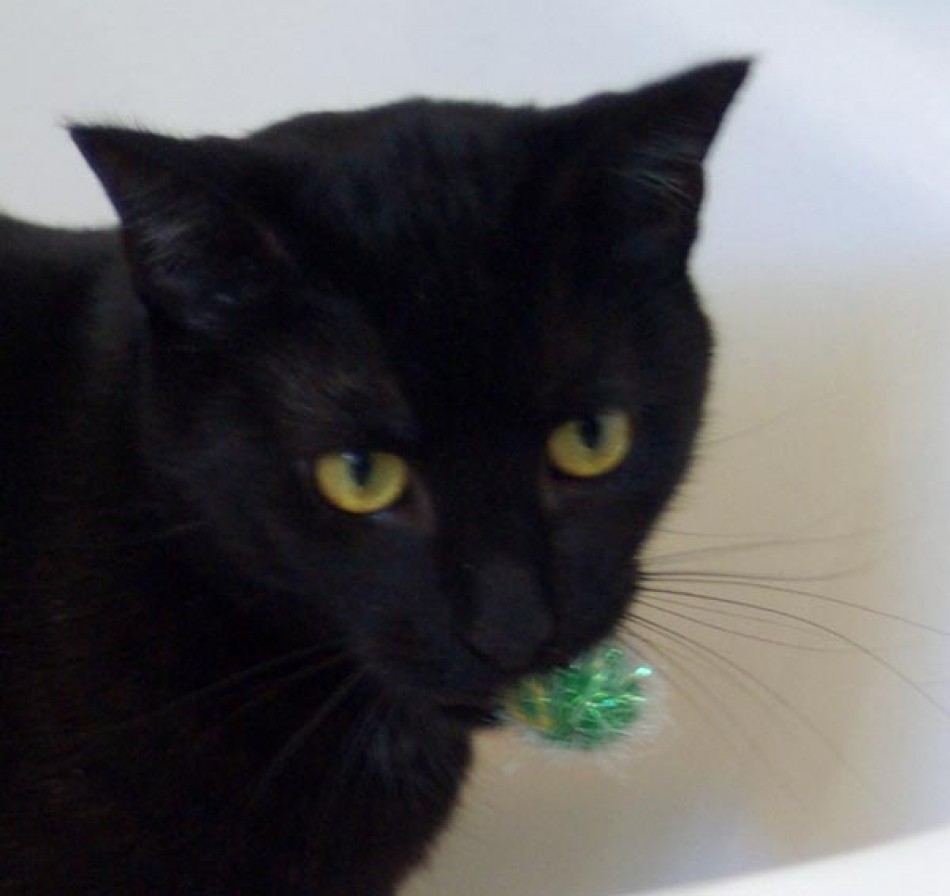 Giuseppe and his green sparkle ball.

On the subject of poetry and cats, here is a poem I read at my 2009 poetry reading inspired by Giuseppe and all cats at play, and how that relates to my own creative thought and that of all humans.

Cats are pretty intelligent, so I’ve never been able to figure out how they fool themselves into thinking that a little sparkly green ball is an object of prey, especially when they get all carried away and race all over the house, growl at other cats when they come near the catch, and stash it in a safe place when they are done.

I figure it’s a starting point for the imagination, something to follow down the rabbit hole like Alice into a wonderland of discovery.

I decided to go ahead and record it anyway because I wanted to try out another trial software. See below for the link.

Loping along, he freezes in mid-stride at the sight of it,
silently flattens himself, tail straight out behind,
ears alert, pupils dilated in amber eyes glowing from black fur,
his whole world centered on his prey,
a little wiggle of the hind end and he creeps forward
one soundless step, then another,
now, completely ready, he springs onto his prey,
a small bright green fuzzy ball with sparkly silver threads poking out all around.

Something about this toy sets off the receptors in Giuseppe’s brain
even though it’s been sitting innocently on the carpet
not moving or making sounds or being in any way provocative,
at the sight of it he’s transformed into the efficient killing machine
which is any feline.

Up into the air goes the green sparkle ball,
he swats, chases, corners it,
a big cat at 18 months, Giuseppe is 13 pounds of dense muscle,
but he picks it up delicately in his teeth and bounds up the stairs two or three at a time,
I hear him galloping around, even hear the bedsprings
as he pursues his prey around the second floor.

I’ve known this cat since he was two days old,
he has never been closer to the outdoors than a screened window,
he has never had to hunt for his dinner
except to find his way to the kitchen.
His mother had no chance to catch some unlucky mouse or chipmunk
and bring it home for an educational demonstration.
Why, then, this activity?

Later, he is sprawled on the bed with his brothers
and I find the green sparkle ball floating in the water bowl;
he does this with his toy, drops it in the bowl when he’s done playing
as if it’s stashed in a place where it can’t escape while he naps
and he can take up where he left off when he awakens.

Cats are not easily fooled.
When you get them a toy that looks like a real mouse
and toss it and push it around then retrieve it yourself,
they watch politely
and when you are done, resume their nap.

This object looks nothing like any prey he might ever chase.
So why is he chasing it?
And why does Cookie play pick-up soccer with a ping-pong ball,
and Kelly leap all around about a scrap of paper,
and the elusive panther caught on motion-sensor camera run after a blowing leaf
and the lion chase his tail?
Surely they see the green sparkle ball for what it is,
or are they so focused on their pretense
that for the concentrated time of play
the toy is convincingly real
and their activity vital?

Do I have a green sparkle ball,
something that relieves me from rational thought
and plunges me wholly into a world
entirely formed of my imagination?
Is that something that humans lost
in the development of rational thought,
our oversized brains finding this process unnecessary,
or is it there beneath our every discovery,
guiding our creative efforts?
When we let our mind play,
our thoughts creating a reality out of the raw materials available,
does that deep focus on the green sparkle ball
pull together seemingly unrelated bits we’ve gathered
and put them in an order we’d never otherwise see?
Did Einstein have a green sparkle ball,
that his thoughts pursued
until it led him to his theory?
Starting the first fire, inventing the wheel,
Proving the world is round, finding a vaccination for smallpox,
Composing a symphony, sculpting the iconic figure,
Creating any device that changes the world around it,
Does it start with chasing the green sparkle ball?

I chose only four images for this four-minute poem, so be patient with the slow transitions! I hope you enjoy them, and the poem. You can find it on YouTube, or click the video link below. (Mlle., the first two minutes are for you.)

All images used on this site are copyrighted to Bernadette E. Kazmarski unless otherwise noted and may not be used without my written permission. Please ask if you are interested in purchasing one as a print, or to use in a print or internet publication.

This entry was posted on February 27, 2012 by Bernadette. It was filed under cats, poetry and was tagged with cats, creativity, photography, poetry, recorded poetry.