I passed this scene just this morning on my way down Main Street for a number of errands; a day very much like the one in the painting, and, as before, I took several photos of the scene trying to catch the glare of the sun, the feeling of the hot, dry silence of a late summer afternoon, the house sheltered from the tracks and from the sun by trees, its little back porch inviting. As usual, I was disappointed that the photo didn’t seem to convey the feeling I wanted no matter what I did with it—and I modified it every way I could think, enhancing the colors and desaturaing them, making it black and white, sepia, over exposing the highlights, but to no avail. I walked along the tracks in another part of town on my way back and think I captured the hot desolate walking of railroad tracks there, which I will post a little later.

So I looked up this painting I’d done almost ten years ago when, in another attempt, I was unhappy with the outcome of my photos, then on film, and decided to paint the scene to see if I could get it that way. Also, our annual art exhibit “Carnegie Painted” was coming up and I was looking for subjects. This painting did well for both efforts. The scene doesn’t look too different now than it did then, or actually many decades ago when I remember walking by here, something I really didn’t think about until just now.

I still have this painting, and because I pulled it out and dusted it off to look at it for this, I also posted it in my shop on Etsy and in my Marketplace. It’s never gotten much attention from people, it’s not classically “pretty” and I understand that, but it has a lot of character, and it’s always brought back that hot Sunday morning on Main Street for me. 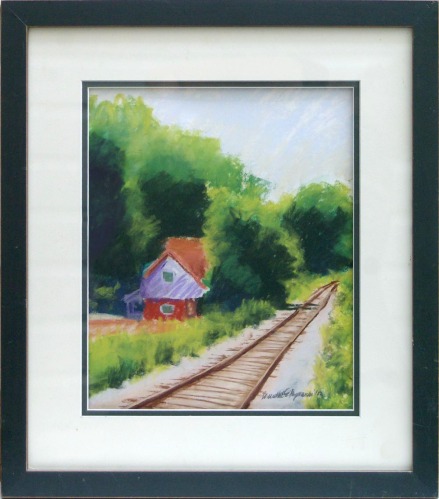 Nothing captures the heat of a summer day for me more than a view of railroad tracks, gravel blazing in the relentless August sun, the empty tracks themselves seeming to magnify the silence of a summer afternoon. Add to that the lush trees with deep, welcoming shadows and a faded blue sky and that’s summer for me, possibly because I often used railroad tracks as a shortcut when walking around in summer.

I also wanted to capture the brilliant highlights on the greenery, and the greenery itself aside from the trees, the scrubby, tough wildflowers that grow in the gravel along the railroad tracks.

I will really digress here and mention that I always associate it with the short story from Stephen King’s anthology Different Seasons entitled “The Body”, which became the movie Stand By Me. I was past my childhood days of following railroad tracks to the next town, but when I read that story something clicked for me—as a writer. As I read I could feel the sun beat down on my head, hear the insects, see the tracks stretch out before me in the quivering mirages of summer heat as if I was walking those tracks again and I decided I wanted to do that too, to take people to the place I was in my imagination by writing about it. I had always dismissed the things I’d taken in through my senses as my own experience and which others wouldn’t be interested in. I realized that the descriptive terms that built an image of physical place for the reader are built on what we take in through our senses.

I thought about that today as I walked along the tracks in the sun in 94-degree heat, much hotter on the creosote-soaked ties and metal rails, the brush and wildflowers growing tall around me, the tracks in a flat valley though just a short distance, a shortcut from one part of town to another. But I took in every detail, color, scent, sound—that mid-day quiet with the occasional insect or one bird, then silence—my thoughts, some day this will all appear somewhere in something I write. 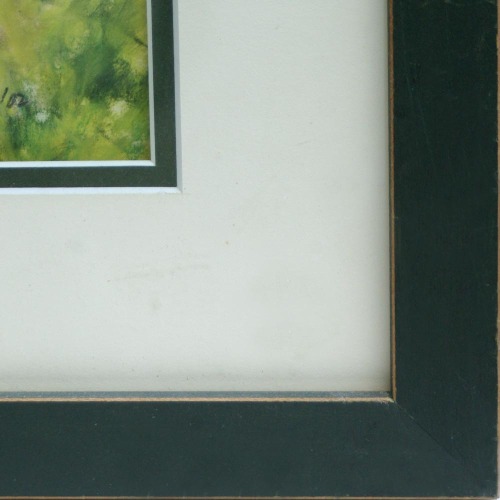 I’ve always been fascinated by houses that were right next to railroad tracks as well, wondering how people managed to live there in the days when trains screamed by and emitted tons of toxic pollution. It all tells a story of a time gone by extending into today. While this house reminds me of many I’ve seen along other railroad tracks, this house is right off of Main Street in Carnegie and is still occupied. I took a few hours on a Sunday afternoon in 2002 to paint it for our annual art exhibit, Carnegie Painted.

This original pastel is painted on Wallis Sanded pastel paper, image size 9″ x 12″. I framed it in a custom moulding pine frame painted dark green with edges trimmed to natural wood, a 2-1/4″ acid-free natural white top mat and a 1/4″ acid-free forest green bottom mat. Finished framed size is 14″ x 17″. It’s in my shop on Etsy, so click on over and take a look.