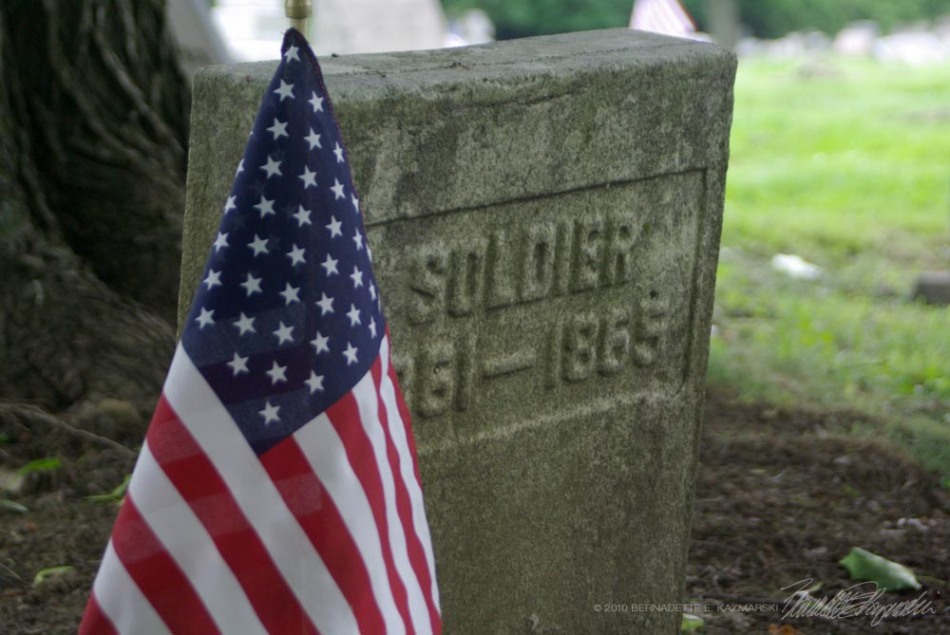 In the dense, comforting shade of a century-old spreading maple, a section of the row of headstones farthest back in the military veteran’s section, the first stones to be installed during the Civil War, reads only:

A father, brother, husband, son of someone, unknown, but honored by a headstone that tells of his final sacrifice, rests there.

One of the most moving photos I took from the 2010 Memorial Day ceremony at Chartiers Cemetery, but perhaps the most fitting, no name, no rank, no distinguishing remarks, but the most common thread of all, a soldier.

And not just in remembering the Civil War, or even other conflicts following. My ancestors were fighting their own civil wars in Eastern Europe at the time of America’s Civil War, only one in a long line of civil wars that perhaps finalized their decisions to leave the only land they’d known to come to America for freedom and a chance at the dream they’d never see, not even today, in the lands where their families had lived for centuries. A few decades later, they had no qualms about bearing arms and traveling back to those lands to protect the country they had embraced as their home. Centuries of soldiers everywhere who fought for freedom, protected their loved ones, gave their lives, each brought us a step closer. May the day soon come when no one needs to die for freedom.

This photo is one of my most often-shared images from this site and on Pinterest; I am honored.

This entry was posted on November 11, 2013 by Bernadette. It was filed under carnegie, carnegie pa, historic site, holiday, photography and was tagged with civil war, headstone, memorial day, photography, soldier, veterans.