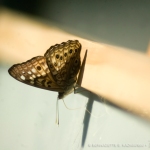 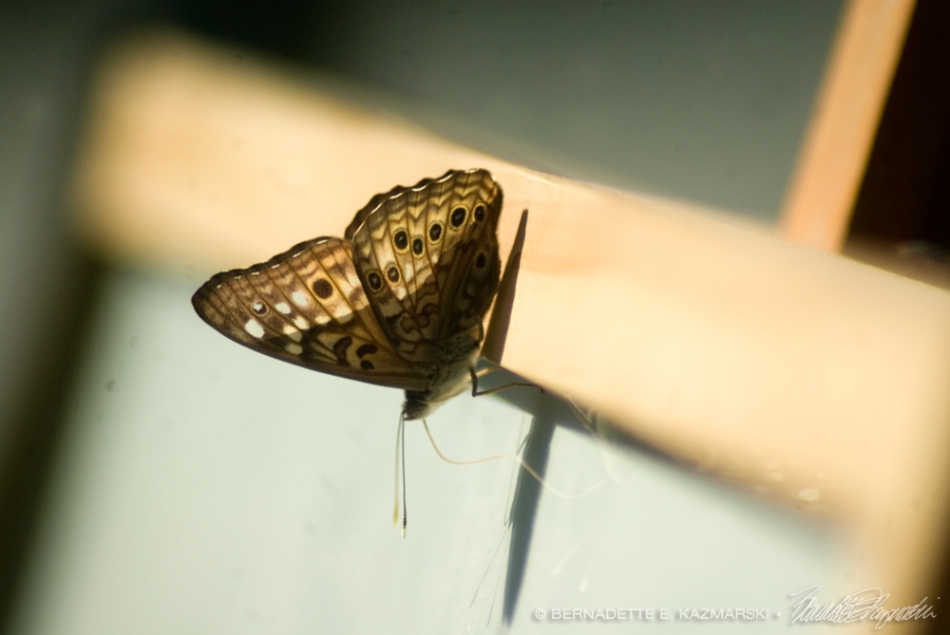 The butterfly lands on the top of the frame of the portrait.

A Hackberry Emperor butterfly explores the frame of one of my prints at an outdoor event; I got so many good photos but this one, where you can see both the butterfly’s shadow on the mat and reflection in the glass was extra special. It was what the butterfly did after this that was most interesting though.

I’ve had animals react to my portraits before but never butterflies, and I was captivated by this butterfly’s activities on Saturday morning as I organized my display at Tails for Trails. Butterflies aren’t unexpected in places like trails in the woods and I often see them landing on all sorts of unusual things like cars and human structures, so landing on the top edge of the frame of one of my paintings on display isn’t all that unusual. I was all over it with my special lens combination intended for extreme close-ups since I could get close to this butterfly without it thinking I was a loon and flying off, and I got a number of nice photos of it on the frame. I learned when I got home and identified it with the detail in my photos that this activity was typical for a male, hanging out atop a tall object to watch for girl butterflies, and resting upside down on tree trunks.

The butterfly lands on a “branch” in the painting

He began walking down the glass of the portrait and exploring the faces of Sophie and Ellie in the portrait, or so it seemed. He walked over both of their faces and then thoroughly explored Sophie’s nose and mouth; it was feeling a little Silence of the Lambs-y when he was sitting over Sophie’s mouth, but then again it was just a print of a painting. But when he attempted to perch on the branches of the Japanese barberry in the painting and landed on the leaves at the bottom, which would be a natural camouflage in life, I thought my skills had reached new heights of affirmation.

The art was actually a giclée print of the portrait of Sophie and Ellie, so I’ll have to tell the folks who made the print how convincing it is.

The butterfly lands on the leaves.

But most telling for me was the fact that I knew both Sophie and Ellie have passed, Sophie just within the past year. In the portrait you see the two on their porch, but their yard actually adjoins a local trail, and in the photos the two were “being very good”, intently watching the people, but not barking. Butterflies are thought to be the spirits of departed souls joining the mortals for a visit, and thi sbeing a benefit dog walk there were plenty of people and dogs to observe.

Below is an animated gif showing all the most interesting images of the butterfly in action. Slide shows have been a little bit of a problem on some devices, and creating an animated gif is actually quicker for me than setting up a slide show, but it means you don’t have any control over the images since it just keeps displaying over and over. It should be visible on all devices, though.

He spent the most time on that painting, but he also visited another—trying to get to the flowers, perhaps?

The butterfly also found another painting he liked

And read a little more about the Hackberry Emperor butterfly.

I also posted this story on The Creative Cat.