The Fountain at The Point 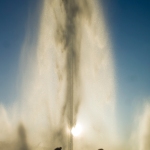 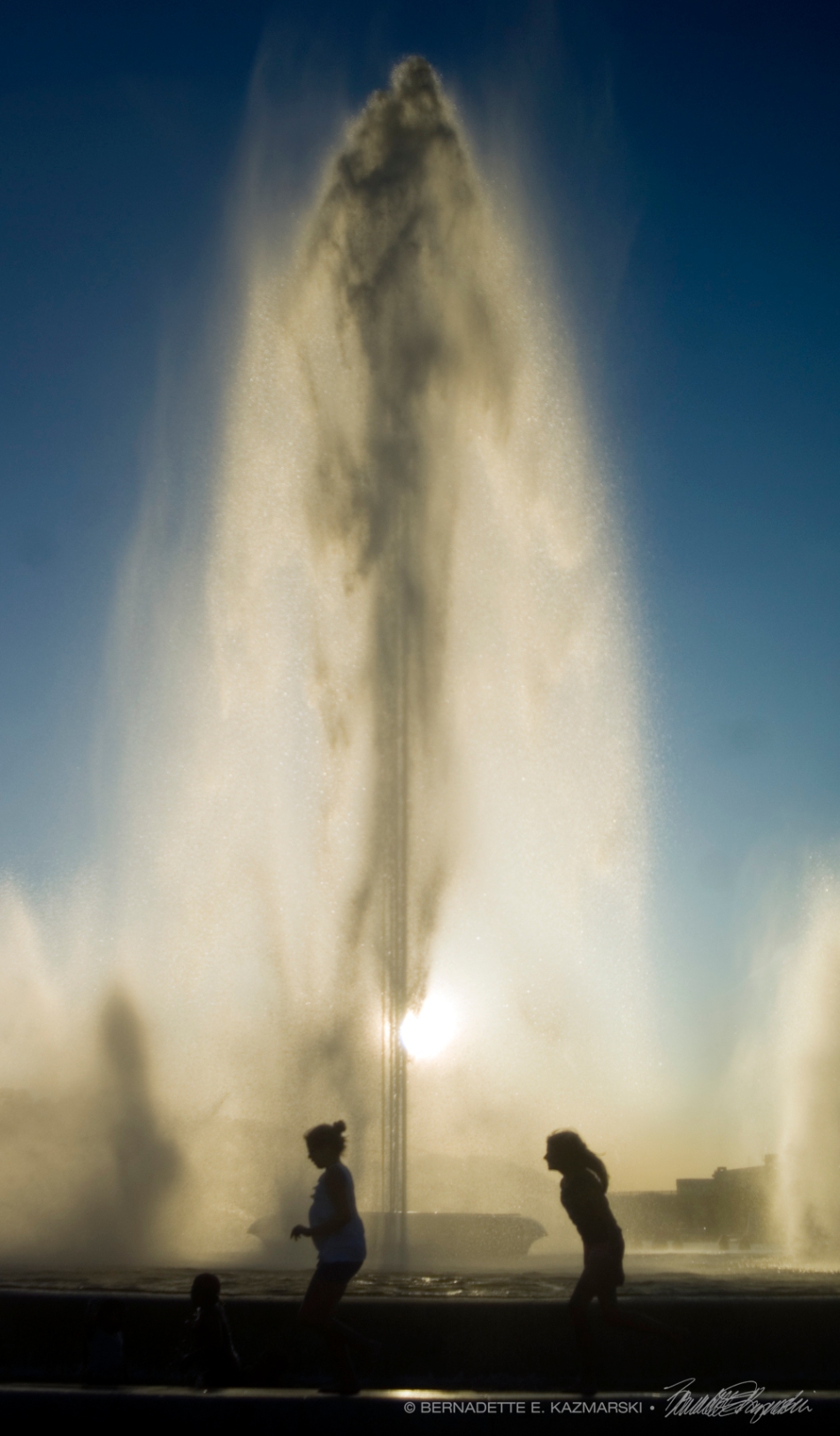 Two young girls run through the wading pool around the fountain.

I went to a concert at our annual Three Rivers Arts Festival weekend before last, and I captured so many images I was absolutely overwhelmed—as well as busy with a big project in house so I barely had a chance to review and edit photos. I realize it’s been a week since I posted anything at all! But a little distance from all those photos and getting the big project done gave me a little more perspective and choosing and editing images was actually easier.

The Point at Pittsburgh is the headwaters of the Ohio River, and the reason Pittsburgh exists where it does. The Allegheny River flows from the northeast and the Monongahela River flows from the south east and they come to a confluence in this valley and flow on to West Virginia, Ohio, Kentucky, Indiana and Illinois until it reaches the Mississippi River in Cairo, Illinois. It’s an interesting feeling to stand above this point and see the rivers come together and flow off through this landscape that was once so scarred by industry and pollution, but which is now clean and green, the hills still tree-covered, the waters, well, I’ve had a swim in each of the rivers. 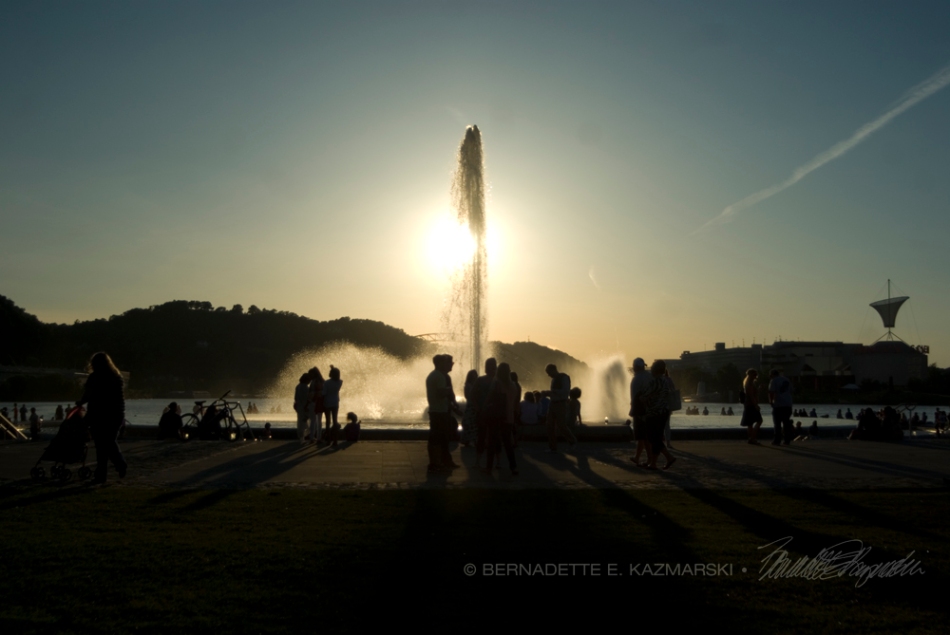 People gather at the point during the festival.

The most surprising thing is the point itself. Because river travel was so important for industry, this very point was once the site of factories and warehouses, trainyards, docks and even coal tipples that loaded barges and boats to carry raw and finished materials from the hinterlands of Pennsylvania, Maryland and West Virginia into Pittsburgh, and picking up more to travel down the Ohio. If you’ve ever seen the land left behind after a steel mill or a chemical factory or a glass plant has moved on, it’s about as dead as the earth can be. But with the beginning of Pittsburgh’s Renaissance in the 1950s, this point of land was taken for a state park, rehabilitated and made a lovely place to visit and see the city and the rivers from a unique point of view—Pittsburgh is very hilly, and there aren’t many places that are this flat.

The fountain celebrates this spot with three short fans each facing a river, and the spire in the center fed by the “fourth river”, an underground river that flows out of Coal Hill or Mt. Washington directly underneath the Point. 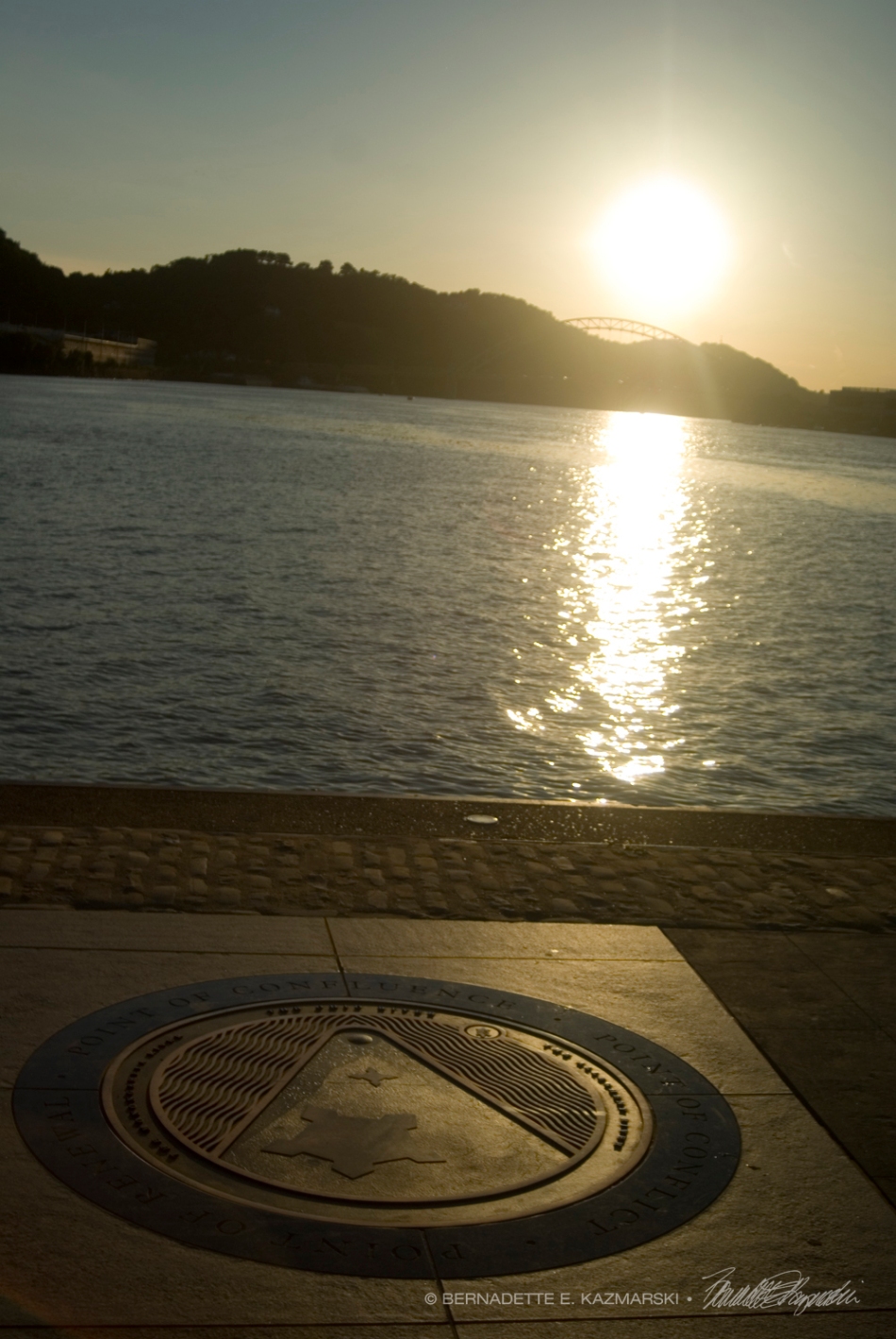 The plate marking the Point.

The seal above is on the pavement near the edge of the wharf and has the names of each of the rivers on the side facing that river and also reads, “Point of Confluence, Point of Conflict, Point of Renewal”. A pentagonal shape marks the spot where Fort Duquesne once stood. I’ll be writing more about that with other photos coming in the next few days.

Below is a photo of the point from up on Mt. Washington from 2011 when the Point and the park were under construction so that you can get an idea where this fountain stands and see the confluence of two rivers that makes a third. 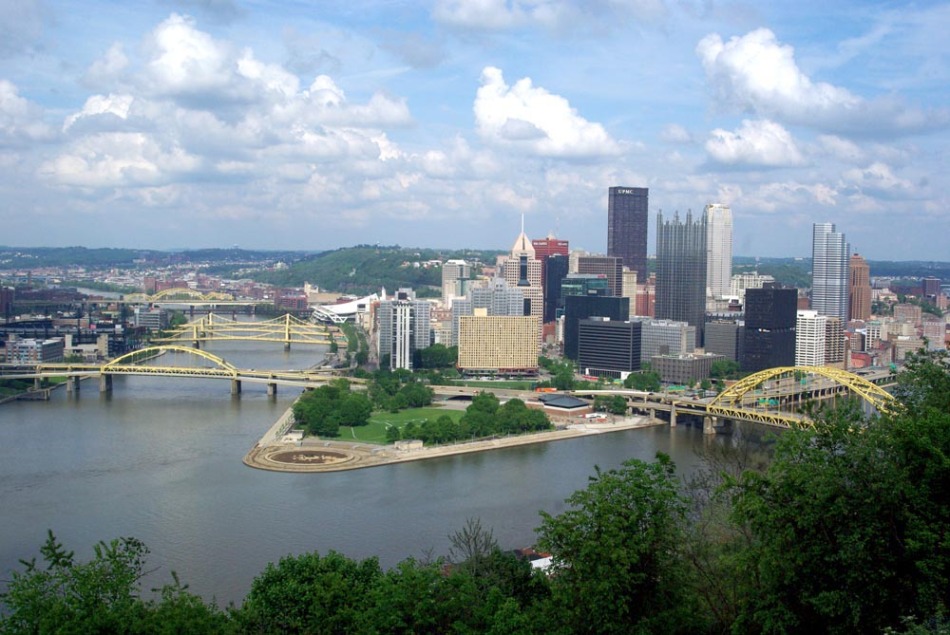 Ahh, Pittsburgh. That’s all of it, right there, just a little handful in the valley where the Allegheny and Monongahela meet to form the Ohio. And on a day like this, there is no more beautiful little city.

Actually on any day. Or at night, when Pittsburgh’s lights reflect on the rivers. Personally, I’d rather be out in a field somewhere watching the hawks or stalking butterflies; I’m not a person to visit cities for fun. However, that’s where my art materials are, and often where the poetry readings are and the symphony and ballet and opera, the universities and better hospitals and a lot of other things I don’t even realize make life a little better for the existence of this little city.

And the most magical thing, as I was standing atop Mt. Washington with a bunch of other locals and visitors all taking the same photos was the cacophony of languages in addition to English: Polish, Ukrainian, Russian, German, Chinese, Japanese, Hindi or Urdu, German, and someone  speaking with a very rounded Australian accent. Also, Pittsburghese, ‘n’at. I grew up hearing a variety of foreign languages spoken by people whose first language came from their home country, and in some cases their children who learned it as a matter of everyday life, and still all these wonderful conversations happening like leaves fluttering on trees, everyone could be saying the same thing, but everyone’s version of it is different and special.

Don’t see any “hell with the lid off”, do you? I think we can dispense with that myth. I heard about the 1940s when my mother said she had to wrap herself in a scarf, wear her blouse inside out and another on top, then change when she got to work every day or all would be caked in soot. I remember some pretty polluted summers in the 60s and 70s when the air would hang yellow and sulfurous over everything. It was indeed unfortunate to lose our one big employing industry, steelmaking, but out of the pits of darkness Pittsburgh rose up, cleaned itself off and went on. It’s an example of how not only a city but an entire region can change into something completely different from what it was.

I love our tree-covered hills, our free-flowing rivers and clear blue skies. And where else in the world would Roberto Clemente, Andy Warhol and Rachel Carson stand side by side, as they do in our “sister bridges” over the Allegheny River, the three peaked suspension bridges on the left? I live ten minutes away from this, and ten minutes away from farmland in the other direction. If I have to live near a city, this one is pretty good.