The Extraordinary in the Ordinary

The post card invitation to my first solo exhibit.

“The Extraordinary in the Ordinary: Celebrating the art in everyday life”

In every moment of every day, everywhere I go, I see something extraordinarily beautiful and inspiring.

I actually began planning in January, only waiting because I really wasn’t totally certain when I’d leave my day job, but a local gallery where I’d hung my artwork for years would be the place, and they could fit me in later in the year. I was grateful because other than promoting it I had no idea what to include or what to say.

I’d been working in advertising and promotions for years so the place to begin was a title. I had a good idea of what inspired me and that was what I wanted to use, but how to sum it up? I remembered this phrase, “the extraordinary in the ordinary”, from something I’d read over the years and it stayed with me, and I knew it fit well with my work: finding those moments that took my breath away and interpreting them as best I could in whatever medium seemed to suit the moment best, from my cats to landscapes to flowers and the streets of my home town.

The back of the post card invitation to my first solo exhibit.

The artwork I chose the exhibit was, well, just about everything I’d done to that point in my life…I’m a little embarrassed when I think about it, but I was almost afraid I’d never have another chance! But as much as I liked the older paintings, the image I chose for the post card was a newer painting done in a looser style, and though not en plein air I had tried my best to capture that feeling of walking up a path and seeing this, and carrying that inspiration into my little painting. It’s called “Into the Woods at Frankfort Springs”, stepping into the wooded path and seeing the sun-splashed clearing, the ancient cabin, the dense shadows and brilliant sunlight; I didn’t get a good clear photo of it before it went off, so the image is a little soft. 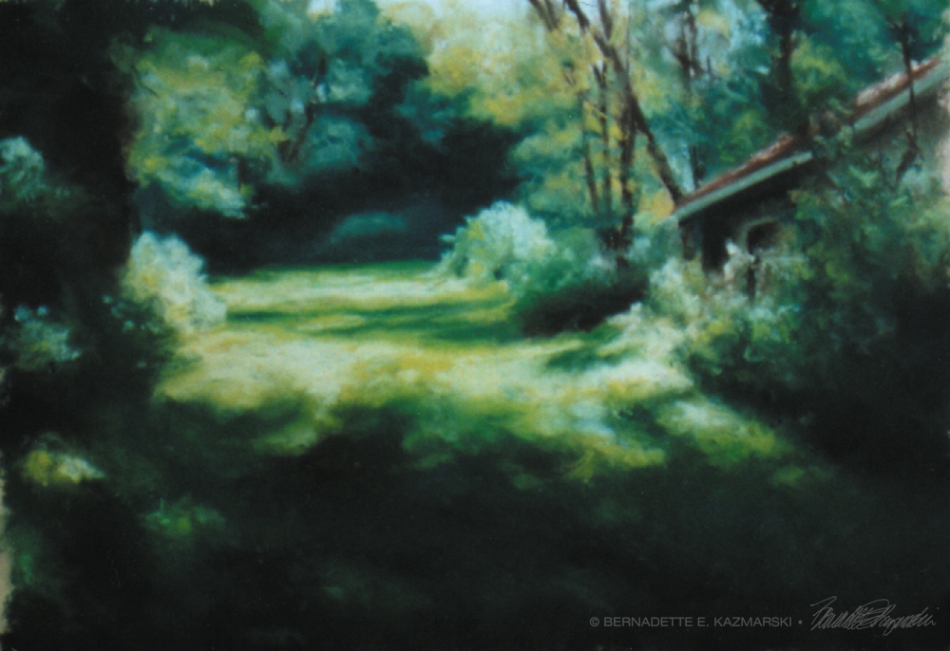 In addition to the artwork I worked my writing into the exhibit by pairing images with poems or essays or statements to make little flyers that I could print out on 8.5″ x 11″ paper and mount on the wall. I used the poem Clouds featuring the autumn landscape from my four seasons series because those purple clouds are just as much autumn to me as the colorful leaves.

One of the poems included in the show.

I had all the artwork framed and only had to organize it, and planned my post cards, the food and publicity and the program, back in those days when you still faxed a press release and color digital printing was available but expensive. I thought I had it all well in hand until my brother suffered a traumatic brain injury at the end of April, and his care and progress through the system made me consider postponing or cancelling the show because I wanted to give my show all of me, not the leftovers, but friends and the gallery owner convinced me that wasn’t necessary. I was also a little scared, and I was glad everyone insisted I follow through. I worked on the program between work at home and doctor appointments, designing it to be printed at home on my trusty laser printer using some of my art in pencil and charcoal and ink, and I settled on legal size paper in a light kraft color, which I tried to represent here but did not, but that’s okay. You can see some of the art in the pages of the program, and a list of the paintings, some of which I still have, and many you can find by title on my main website. 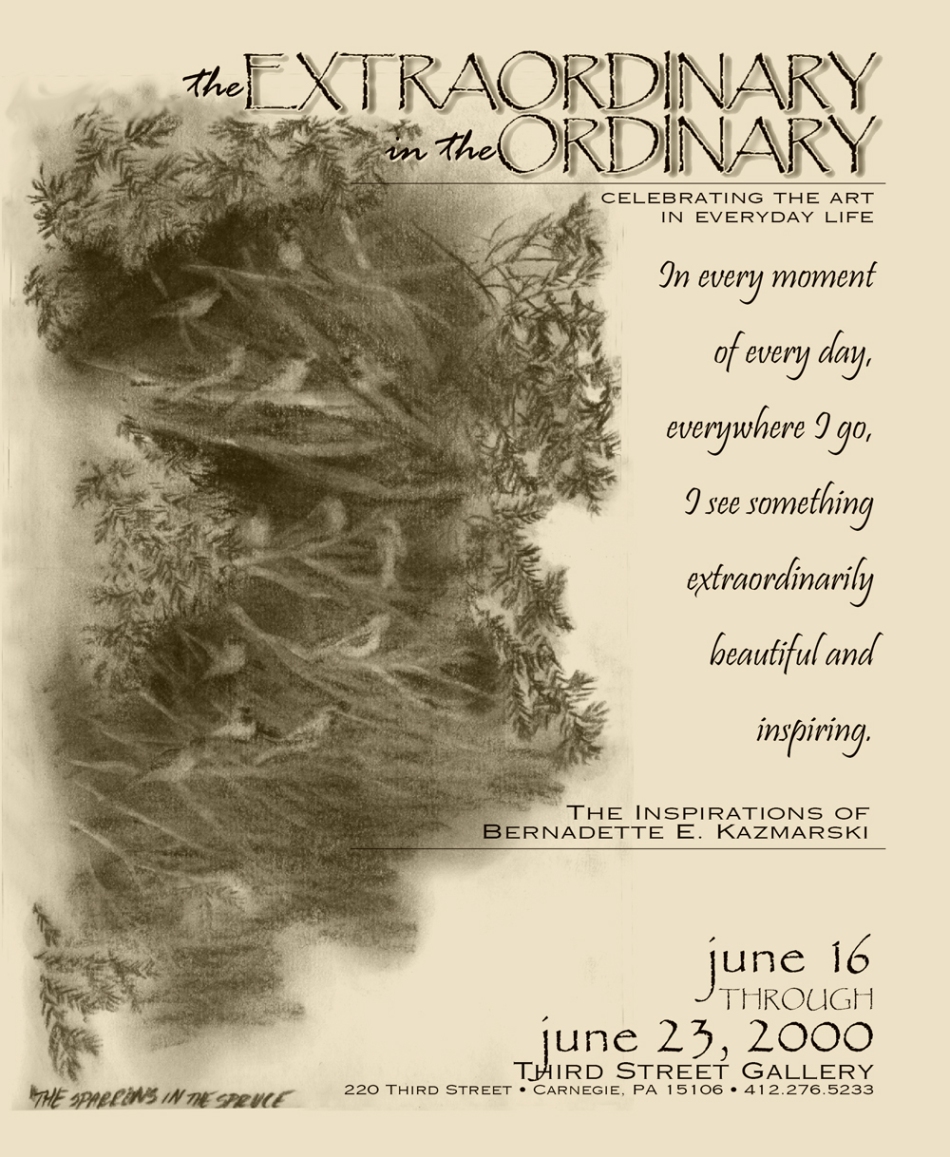 Inside left if my first solo exhibit.

Inside right of my first solo exhibit. 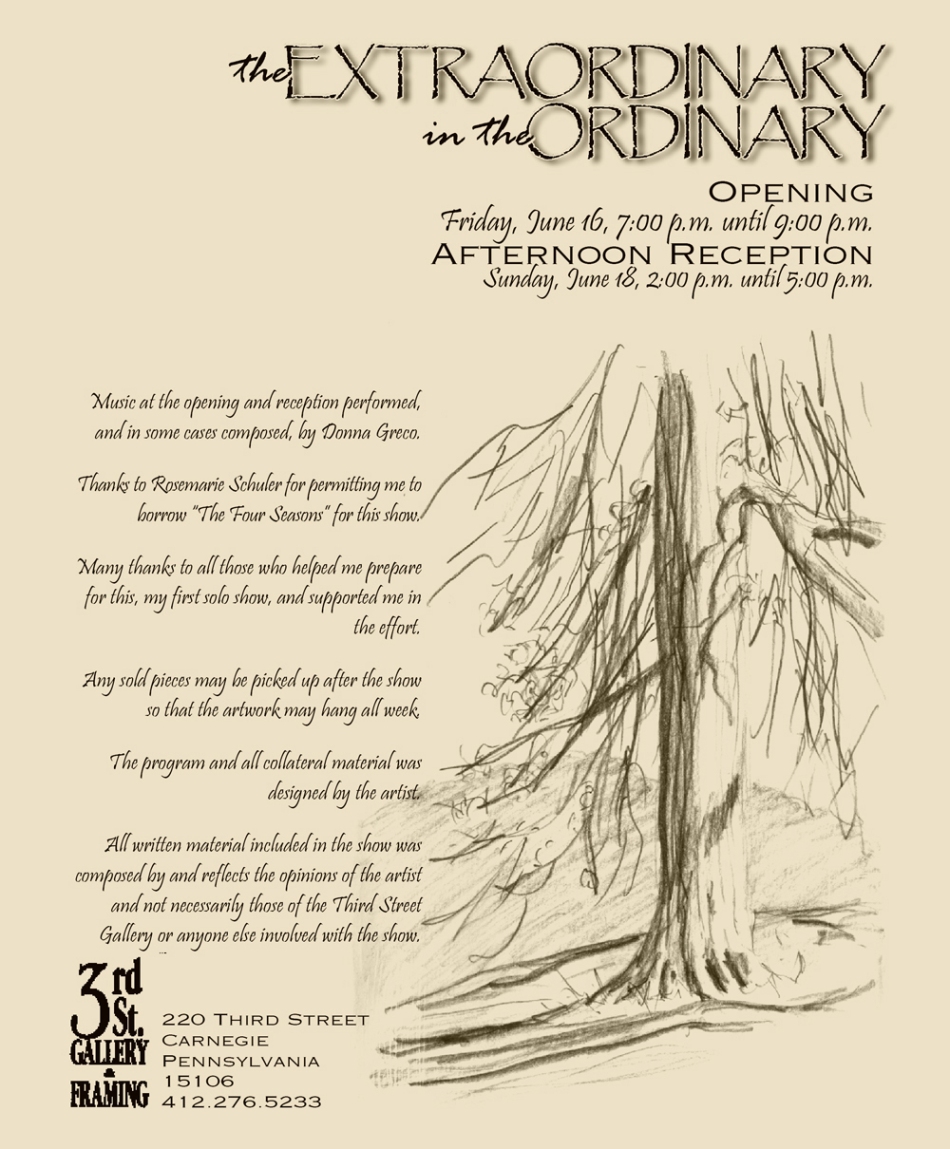 Back of program for my first solo exhibit.

In the end I didn’t sell much but I knew it was because I hadn’t curated the content. I learned quite a bit, and decided having shows wasn’t so frightening after all, and that I’d look for opportunities to have others because I already had ideas for new artwork, and how better to share it? It was not too early to start thinking about my exhibit for 2001 so with ideas from my first exhibit I decided that June was probably a good month since my commercial business began to slow down about that time and I could have all new artwork.

I did have an exhibit the following June, deciding on an easy setup at a local Borders book store. I would have the walls in the cafe for all of June, setting up early morning on June 1. I focused on the new art I would do, even measured the walls, and started with the ones I most wanted to do.

But it wasn’t to be as I’d planned. My brother continued traveling through the system after his brain trauma ending up in a nursing home though he was ambulatory and able to care for himself; he had years of healing ahead and needed a safe place that would care for him after seizures and with piles of medications. But through the months, as I drove our mother to visit him, I noticed she was changing somehow…and I knew something was wrong. After pestering her doctor we began blood tests and x-rays and discovered she had lung cancer, and in May 2001 she had surgery, had complications and nearly died, moving from hospital to a critical care facility. I decided to go through with the exhibit, not knowing how her health would turn out. I was self-employed, this was my income and I’d taken so much time away already I felt I had to follow through. 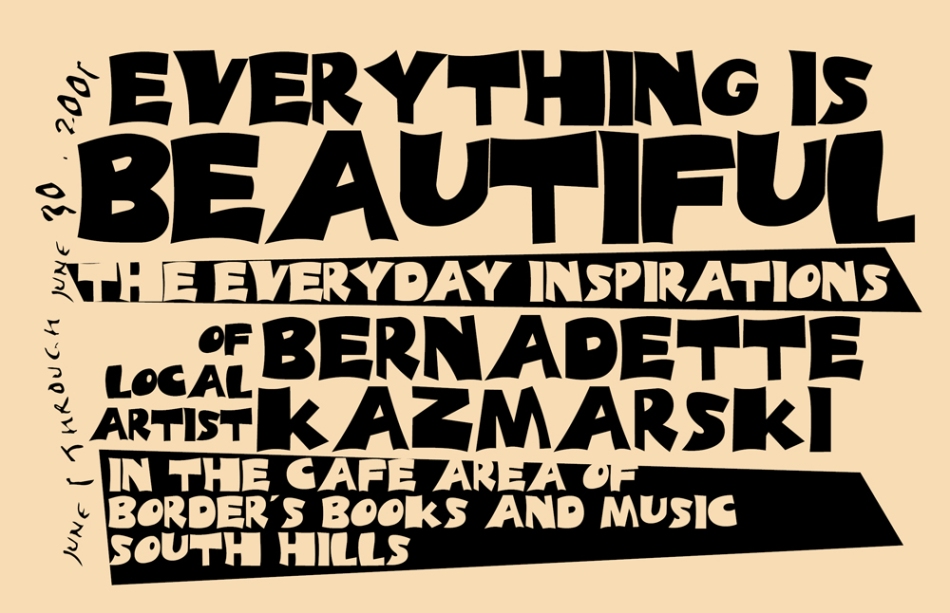 I hadn’t done most of the art I’d wanted to do, but I had done a few, including “Birches 1: Autumn Showers” and “Birches 2: Radiance”, two pieces where I’d experimented with new styles and media as I’d intended the exhibit to be all about experimentation, but that was good enough along with a few smaller sketches. I did cull through the art I had on hand, much of which had been in my exhibit in 2000, and chose the pieces I thought worked together in color and style, and still mixed the content.

“Pepper in Bowl” above was a sketch I’d done of just that, a pepper that somehow was left in the enamel bowl on the deck after I’d washed them. Why not sketch it? I designed the post cards to be printed on my own color printer, on photo paper gloss-coated on one side I’d won in a contest, and I had to use big margins because my printer was just that way. But it was still fun, and people liked the theme. 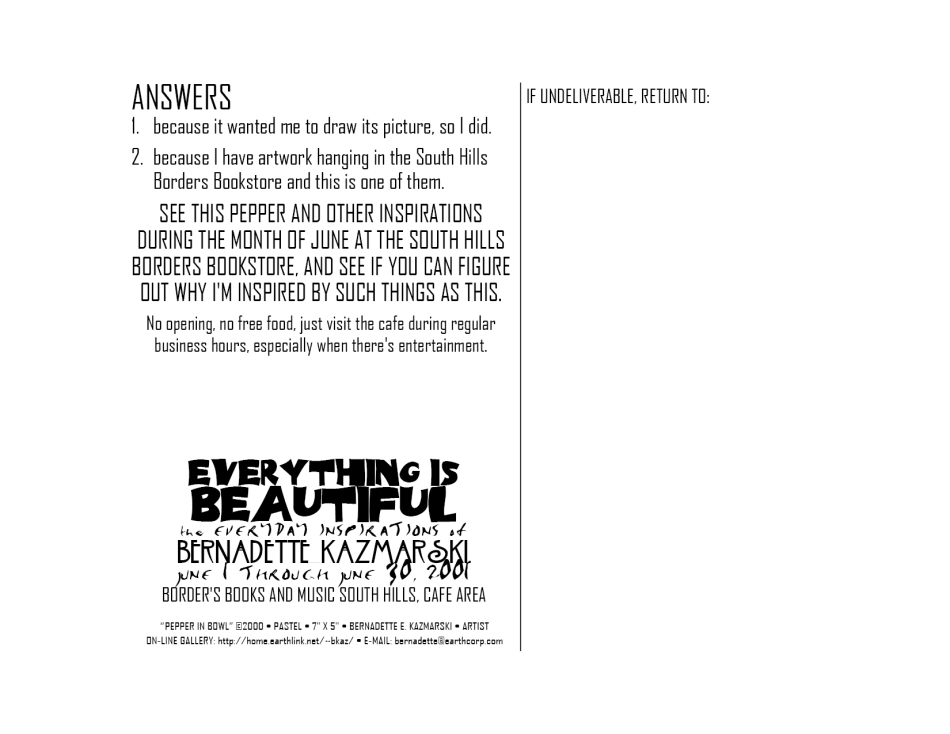 Back of post card for my second solo exhibit.

It all cheered me up too. I also printed out the program on paper at home on my laser printer; the front is above, here is the art list and the back page.

Back of program for my second solo exhibit.

I met some wonderful people during that exhibit, even while managing my mother’s and brother’s health. I sold a dozen works, important for my income in the slower months of the year, and still keep in touch with some of those customers today. My mother recovered and went home at the end of the summer, though she ended up in personal care, very much weakened. My brother slowly recovered and I found a program that could help him rehabilitate over the long term.

I decided an annual exhibit was an important way for me to encourage myself to focus on creating new work, experimenting with different media whether new or familiar, and finding out where my aesthetic senses were at that point so I wouldn’t stagnate. I missed 2003, but I did have solo exhibits of some sort each year in all the other years since I’ve been working at home: “Winter White”, February 2004; in 2005 I had a little shop and had monthly exhibits of new works; “Wild Inspirations” in February 2006 and also “100 West Busway” in July; 2007 through 2014, excepting 2012, I held my annual poetry readings with an exhibit of my latest artwork at Andrew Carnegie Free Library & Music Hall; in 2009 I did my two photo exhibits at ACFL&MH, “Carnegie Photographed” and “Of Harps and Fig Leaves”; and “Sun, Shadow, Ice & Snow: Seasons on the Panhandle Trail” in August 2014.

So it’s 2015, and what will I do this year? I am also planning another Panhandle Trail exhibit, and what got me started on this whole thing was I decided it was time to review my previous exhibits to see what I’ve accomplished and what I might do next, including possibly doing a ten-year update of one or another. I actually didn’t realize I’d done so many exhibits. But I think I’m planning a photo exhibit as well, and am looking for a place and a reason to do an art exhibit.

This is shared in Friendship Friday on Create With Joy.

This entry was posted on June 14, 2015 by Bernadette. It was filed under art exhibit, solo annual art exhibit and was tagged with art, art exhibits, painting, pastel painting, watercolor.